It isn’t often that I am rendered speechless. But after the week I just had…

It started months back, when while groggy and disoriented and drinking my morning coffee, I’d swear I saw something dart across the floor…

In the beginning there were tears, and other times, just an overabundance of curse words!

I bought traps, and deep cleaned every surface… 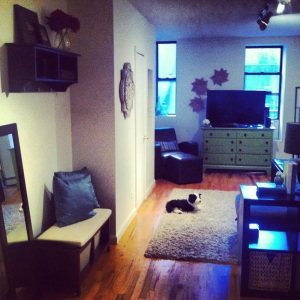 I even went as far to adamantly deny my daughter’s request for anything Mickey Mouse, and prohibit the story of “If You Give A Mouse A Cookie” from every being read in our household.

Once, I even placed my daughter’s stuffed dog to ‘guard’ the living room in a (failed) attempt at intimidating the mice into staying away while we slept…

A failed attempt, because when I woke up one morning I found two holes punctured through the top of the plastic wrap that I had placed over brownies the night before! The entire top layer EATEN!

Needless to say, we spent that entire next weekend tearing a part our apartment and searching out even the tiniest of holes! We laid out poison and countless traps, we even called an exterminator! Even still, the mouse would return! … Over and over… FOR 3 MONTHS!!!

Which brings me to this week: where the better half of the first night was spent balancing my body weight on strategically placed chairs, all while prodding the mouse to come out from behind the refrigerator with a Swiffer. While the next night, we sat down to smell the rotting carcass of another mouse that decided to croak under our couch. (And at that point, because I had already tried everything else, the only thing I could do was take an exceedingly long shower, and spray enough Febreeze to intoxicate me into forgetting that this is my life!)

But that was only a temporary fix! Because little did we know what was in store for us the NEXT night…

It all began when I turned on the oven and was startled when a mouse grazed the top of my foot as it scurried out from underneath in a frenzy! In that moment, I did what any logical human being would have done. I turned the oven back off, maintained composure just long enough to phone my husband, and  tell him I wouldn’t be cooking. Like, EVER AGAIN!!! ( And I meant it.)

I then made a decision that would change our fate forever: I  put a sticky trap directly underneath the oven, where I had just seen the mouse run from.

Interestingly enough, my husband got home unusually fast that night (probably sensing my already fragile state was now borderline skitzo) and sweetly suggested we take a nice long walk together.

Upon returning, I watched my husband slowly make his way up the steps, unlocking the door, only to stand motionless in the doorway for an uneasy amount of time.

“…I think…we caught one!” is all he had to say to get my heart racing, and have me hurrying up the stairs behind him!

Not even 2 seconds after walking into the apartment, the high-pitched screams of a mouse filled the air!

Now for those of you who’ve never heard a mouse scream, I have heard it best described this way…

It’s kind of like those ‘ocean wave cd’s’ with the sounds of the ocean on it… except there’s no ocean wave sounds. It’s just a mouse, SCREAMING FOR IT’S FRICKIN’ LIFE!!!

To which, I concur.

And not only was it SCREAMING, it was staring back at us and scrambling to get loose! It’s back legs stuck in goo, but it’s front half attempting to crawl along the floor with the trap still attached to it!

Upon taking a closer look we realized that not only was there one mouse – there were TWO!!!!! — Even worse, they were eating their limbs in an attempt to set themselves free!

My frantic, late-night google searches of nights past, came flooding back — stories of mice eating through the plastic bags they were placed in and crawling up the pipes, back to the apartment they came from WITH A VENGEANCE!

I cringed, and decided to use a lifeline and phone a friend. Just as she picked up, I could hear my husband’s panic-stricken voice in the background, “… THERE’S 3 OF THEM!!!”

I gagged while quickly getting my friend up to speed on the science-project-gone-horribly-wrong that was going down in my kitchen!

“… I don’t know, If I were you, I would put the mice in a bag and then go outside and hit it against the brick wall until they all die!” she said, strangely calm.

It was apparent at that point that if THIS was the best advice I could get, then only one thing was certain: It was going to be a VERY loooooong night in which NO amount of febreeze would suffice!

I took a deep breath as I hung up the phone, and braced myself for the unthinkable.

First, we decided to cover each mouse so as not to have their beady eyes staring up at us! (And somewhere along the way, it’s quite possible that my husband took it upon himself to step on them, though that’s still up for debate.)

All I know for sure, is once we got to mouse #3 we realized we had a very BIG problem!

I paced back and forth, hyperventilating at the thought of the third one getting away and telling all his mouse friends about the bullies in Apt 2N that needed to be ‘taught a lesson.’ We couldn’t have that happen…

Understand: We were desperate! And it was just a matter of time before they escaped…

In the end, what we did with that meat mallet would no doubt have Bobby Flay’s skin crawling. However, we DID indeed get mouse #3 to let go!

… And once the screaming mice had been silenced, and somewhere between mopping the blood off the floor, and bickering back and forth about whether the meat mallet was still usable, a victory dance ensued right there next to the dishwasher and the box of Honey Bunches of Oats. #ThereAreNoWords

… So class, what did we learn?

We learned that unlike the literary classic claims, its not ‘Giving A Mouse A Cookie’ that’s the problem, its giving him a damn BROWNIE that will have you dishing out more than you bargained for!

And seriously, you absolutely MUST get yourself a meat mallet. Like, pronto! Yah know, #JustInCase